I’m not typically one to keep up with international beauty pageants, but a family friend who is an American of Japanese descent who keeps up with all things Japan mentioned to me the story of Ariana Miyamoto, a half-Japanese, half African-American twenty-year old who just won the title of Miss Universe Japan. If you’re not familiar with Japanese culture, they are historically very closed to outsiders and xenophobic. For those reasons, Ariana’s victory is a surprising development.

Curious about this unusual beauty queen, I read a few articles about her and am very impressed with the maturity and courage of this young lady. Growing up she experienced a lot of racism, with people throwing trash at her, other children afraid to touch her for fear that her dark skin might “rub off” on them, and asking her not to share the swimming pool with them. Imagine being the least popular girl in your class (for some of us this doesn’t take a whole lot of imagination). Now quadruple it.

Despite the fact that she is a Japanese native, speaks Japanese as her first language and has lived in Japan her whole life, the general consensus is that she is not “Japanese enough.” But Ariana rose above the hate and discrimination she was surrounded by to enter beauty pageants, a place where she would be judged on the very thing that people had used against her for her entire life: her appearance. I can only hope to have that kind of confidence some day!

For believing in herself, being willing to challenge heavily ingrained racism and showing confidence befitting a queen, Ariana Miyamoto is a Class Act.

You can read more about Ariana here. 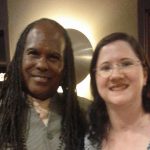